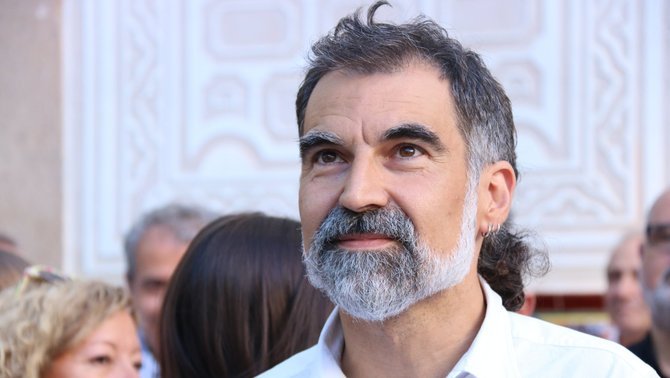 Barcelona, 14th October – The Spanish Supreme Court has sentenced Jordi Cuixart, president of Òmnium Cultural, to 9 years in prison for sedition, an offence he did not commit. All his actions were peaceful, civic and in the exercise of his civil rights. This sentence represents a frontal attack on Jordi Cuixart’s basic rights and those of the other defendants, as well as the criminalisation of the right to peaceful protest for all Spanish citizens.

The sentence is an attack on freedom of speech and assembly.

The president of Òmnium has been unfairly investigated, tried and finally sentenced to prison for having led a peaceful demonstration on 20th September 2017 and for having called publicly for participation in the self-determination referendum of 1st October 2017. He was imprisoned on 16th October in the same year and has spent nearly two years in preventive custody.

All his actions represent the exercise of fundamental rights like freedom of speech and the right to demonstrate, which are included and protected in the Spanish Constitution, the EU Charter of Fundamental Rights and the Universal Declaration of Human Rights. This has been denounced by the UN Working Group on Arbitrary Detention and NGOs like Amnesty International, the World Organisation Against Torture and Front Line Defenders, which have demanded his release.

There was no sedition: Jordi Cuixart did not promote or act with violence at any time

Demonstrations and actions planned for the coming days and weeks

In response to the sentence, public demonstrations are expected in the main Catalan towns and cities. At midday today, representatives of Catalan civil society (for and against independence) took to the street in Barcelona to show their unity in opposition to the Supreme Court’s decision. The main trade unions and business organisations of Catalonia took part in the demonstration. Mass actions are soon to be announced for the coming days and weeks.

Jordi Cuixart is the president of Òmnium Cultural, the most important cultural and human rights NGO in Catalonia and Spain, with over 170,000 members. On 16th October 2017, he was imprisoned for having led and taken part in a demonstration on 20th September of that year in protest at the arrest of 16 members of the Catalan government who were supposedly organising the referendum of 1st October. Since then they have spent 2 years in preventive custody.

On 1st October 2017 2.3 million citizens took part in a referendum which had been suspended in advance by the Spanish Constitutional Court. In response, the Spanish government deployed 10,000 members of the National Police and the Civil Guard throughout Catalonia and took brutal police action against voters, leaving over 1,000 injured according to the health service. To date, the Spanish authorities have not fulfilled their obligation to investigate police violence, as requested by different international bodies.

On the contrary, court action has been taken against the people who worked to bring about a self-determination referendum on the political future of Catalonia, a political instrument of which 80 % of Catalan society was in favour; the same percentage is against judicializing the conflict. Moreover, international observers like International Trial Watch, the International Federation for Human Rights and EuroMed Rights have detected serious irregularities in the judicial process.

Call by the UN WGAD to the Spanish government