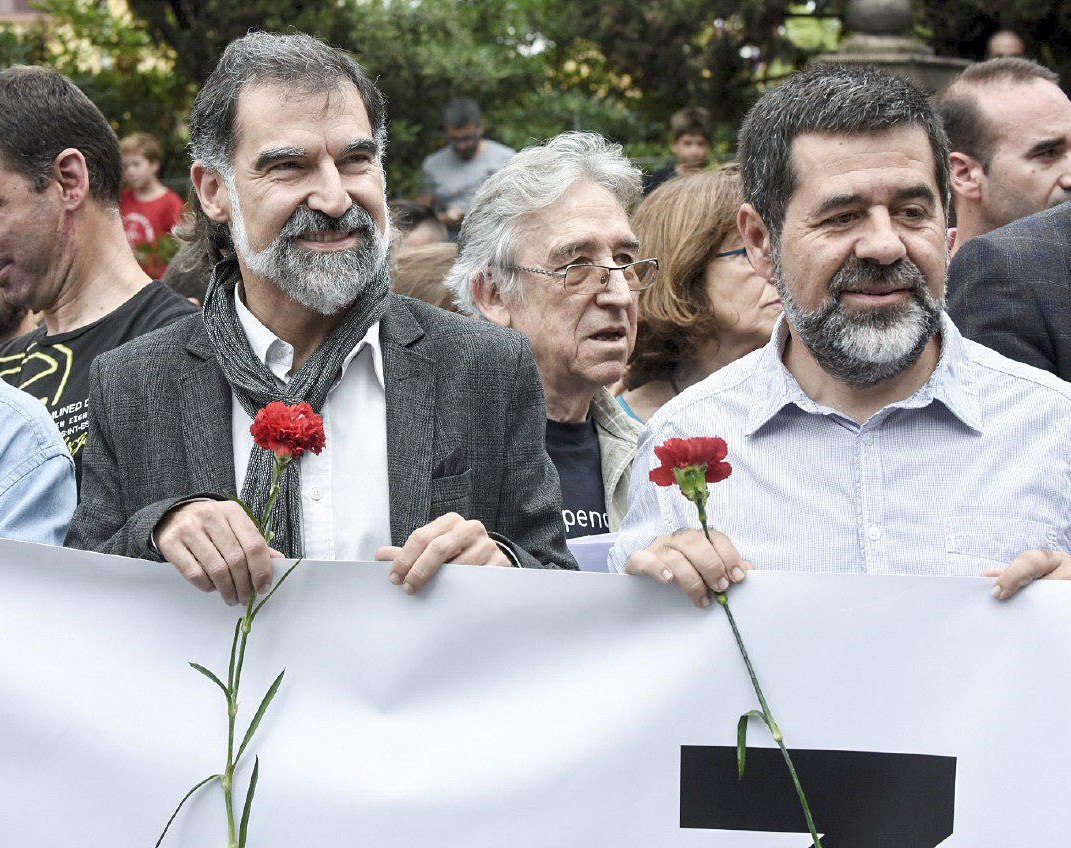 Since the beginning of the prosecution against Jordi Cuixart, Jordi Cuixart and the other Catalan leaders; Òmnium Cultural started a silent and continuous work to raise awareness around the world of the violation of human rights taking place in Spain. Ever since, more than 50 organisations and renowned figures have denounced their imprisonment for being a clear affront to civil and political rights.

Today, 19th November, we have known the last report of Amnesty International about the situation of the Catalan political prisoners. This time is one of the most important human rights NGO who states that Jordi Cuixart and Jordi Sanchez’s convictions, president of Òmnium Cultural and former president of ANC respectively, are unjust. For this reason, Amnesty calls for their immediate release and for declaring their sentences null and void.

Amnesty International’s report is a major blow against the international reputation of Spain. According to this global NGO, prison sentences given to Jordi Cuixart and Jordi Sánchez mean a disproportionate restriction of their rights to freedom of expression and peaceful assembly. Amnesty adds that they should have never been sent to prison in the first place.

The NGO considers that the definition of «sedition» as «ambiguous» and «too general and dangerous». It also states that the 9-year prison sentence given to Jordi Cuixart violates the right to peacefully protest and freedom of expression. Amnesty deems the verdict of the Spanish Supreme Court a breach of international law in human rights, which causes defencelessness and sets limits to the right to peacefully protest.

For all the above, Òmnium Cultural makes the following demands:

FIRST. We call for the immediate release of the Catalan political prisoners, the return of the exiles, and the annulment of the Supreme Court’s verdict. It’s been 764 nights since Jordi Cuixart, president of Òmnium Cultural, was unjustly incarcerated. Since then, many voices have spoken out for him at the national and international levels; demanding his immediate release and that of the other political prisoners.

This last Amnesty’s position again makes clear that there is no justification to keep them in prison: it makes no sense in the XXI century a state, supposedly democratic one, utilises its own institution to try to silence and weaken a peaceful, democratic and legitimate movement.

SECOND. We urge the Spanish government to comply with the stance taken by more than 50 international organisations and NGOs such as:

These are only a few international voices who have spoken up for the compliance of human rights and the release of the Catalan political prisoners. Since civil disobedience and nonviolent actions are criminalised, all social movements in Europe should be worried for their future, and Europeans for their freedom.

Spain has no other option but to act. Amnesty’s stance, similar to others made with regard other cases of political prisoners in Russia, Poland or Turkey, makes it harder to turn a blind eye. The fact that the most important human rights organisation in the world contradicts the verdict of the Spanish Supreme Court, must have political consequences and condition the configuration of the new Spanish government, self-proclaimed as «progressive minded».

The growing and unstoppable repression that we have experienced over the last two years shouldn’t be allowed in a democracy. Since October 1st 2017, 1.600 Spanish citizens have been injured by police brutality for having exercised their rights; the number of political prisoners continues to grow and 1000 people are being prosecuted with the Penal Code.

Truth and injustice will be out. The international community has repeatedly warned and urged the Spanish government to put an end to undemocratic actions. Today is Amnesty International, but next week it will reach the deadline given by the United Nations Working Group on Arbitrary Detention. After 6 months, Spain has ignored the calls made by this UN body to free Jordi Cuixart and other political prisoners.

THIRD. By ignoring these more than 50 calls and stances, Spanish Judiciary has shown its partiality, which is far from meeting the international standards in human rights. For this reason, we demand that all political parties who want to take part in the solution of the conflict to commit themselves to boost and ratify Protocol 16 of the European Convention of Human Rights.

It’s been one year since this Protocol came into effect and has been signed by countries such as Finland, The Netherlands or France. So far, Spain has declined to sign it. The aim of this protocol is no other than avoid that Judiciaries in member states of the Council of Europe, like Spain, pass sentences against the European Convention on Human Rights. This is a very valuable tool that allows courts in every country to consult Strasbourg before announcing a verdict that could violate human rights. If this protocol was signed, Spain could avoid to shame itself before the international community. With its signature, Spain might present itself as a human rights defender in the world.

For this reason, we call on Spain to sign this protocol. Not a single government can call itself «progressive minded» or «human rights defender» while ignoring reports from Amnesty International and the United Nations. Nobody would understand the configuration of a progressive government in Spain that doesn’t listen to these bodies.

Finally, and in a view to solve the conflict between Catalonia and Spain democratically, we’ll send this official statement to all political parties, the Ombudsman (Catalonia & Spain) and those international organisations with which we have built a relation over the last two years.

National Board of Omnium Cultural