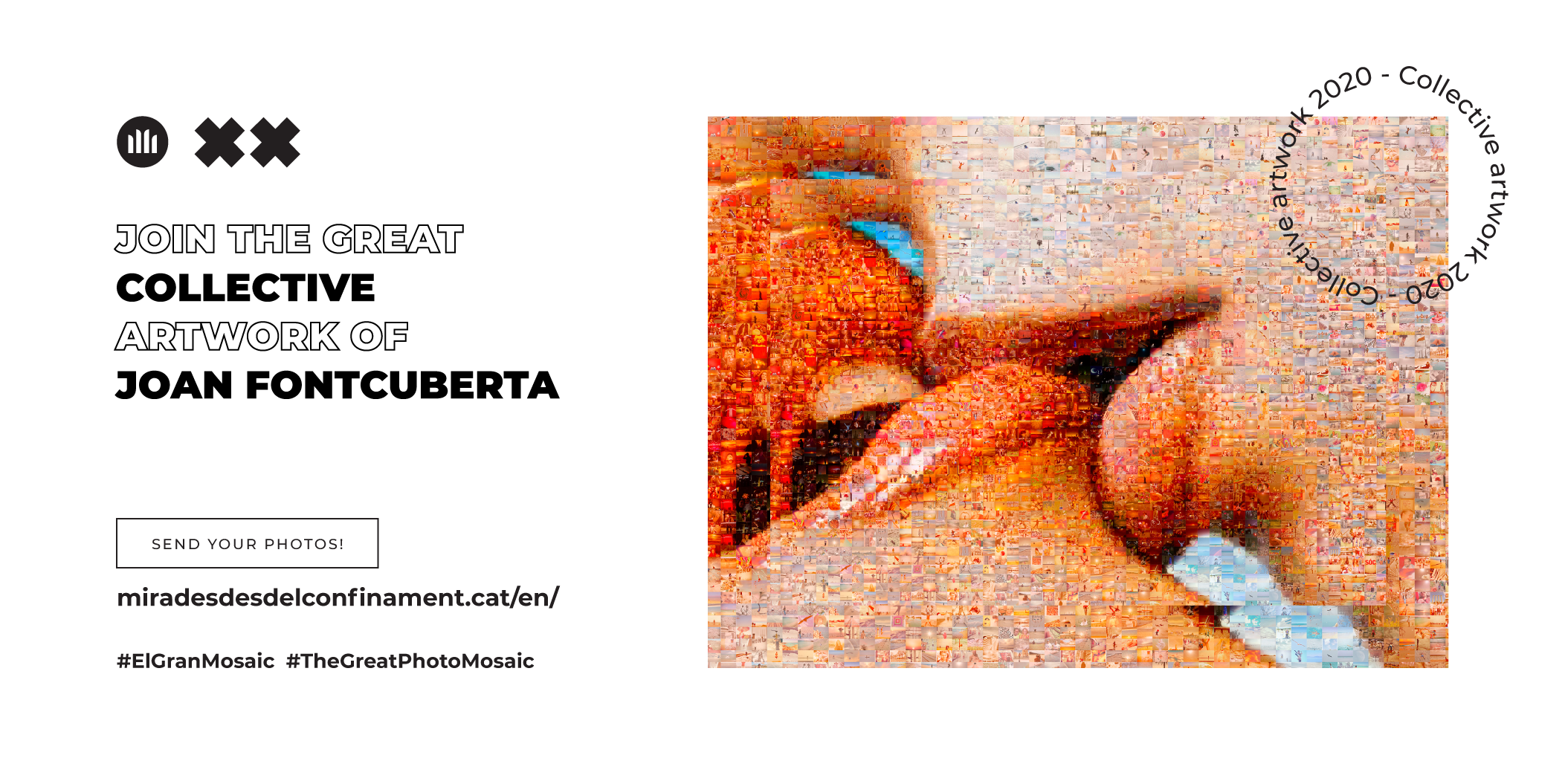 “Glimpses of the Lockdown” is a joint project of Òmnium Cultural, Joan Fonctuberta and the Cruïlla music festival that invites people from all over the world to take part in a gigantic photomosaic by answering this call: “Tell us your lockdown in a Picture”

Fontcuberta has been awarded prestigious international prizes and honours: from winning the Hasselblad Award or Spain’s National Prize of Photography to being given the title of “Chevalier de l’Ordre des Arts et des Lettres” in France

Barcelona, 15 May 2020 – Òmnium Cultural, the Cruïlla Festival and the internationally renowned artist Joan Fontcuberta have launched “Glimpses of the Lockdown”, a participatory work of art – in the format of a massive Photomosaic – to pay homage to collective solidarity during the Covid-19 crisis. This project seeks to depict how, through thousands of photographs of the confinement, people and civil society have self-organised to endure and overcome these difficult times.

The artist Joan Fontcuberta will be in charge of turning this collective resilience to manage difficulties into an artistic and cultural project of international repercussion: a great Photomosaic made up of hundreds of thousands of photographs. The artist will create a final image with all these pictures, an image that will be unknown and kept secret until the last moment.

Omnium Cultural, the main cultural and human rights NGO in Catalonia with more than 180.000 members; and the Cruïlla Festival, one of the most important music festivals in Barcelona; will help with the communication and dissemination of this project.

“With the commitment of Joan Fontcuberta, we save for posterity the struggle for a dignified life through culture and empowerment. A brave culture that reaffirms the strength of collective power “, said the president of Òmnium Cultural, Jordi Cuixart, imprisoned now for 940 nights for defending fundamental rights. The organisation’s vice-president, Marcel Mauri, also emphasised the ability of citizens to overcome difficulties: “This confinement has changed our daily lives. We saw the balconies full of life; we have discovered other ways to be with our family, friends or neighbours, and we have applauded the medical staff, the supermarket cashiers, and the volunteers, who have worked against the clock to save lives and leave no one behind”.

From the 15th of May on, through the website miradesdesdelconfinament.cat/ en, photographs of the public will be collected in response to the question: “Tell us your confinement in a picture”. The aim is for everyone to express, through as many images as they want, what the confinement has represented, either from their life at home or from the essential work of all those sectors that have been part of the chain of essential services.

From the thousands of views that will be gathered, Joan Fontcuberta will apply his artistic perspective to end up building a great Photomosaic: “Every picture, every glimpse, is worth it: the idea is to be able to share everything, from those moments in which we are worried to those little bursts of domestic creativity,” explained Fontcuberta. With the set of all the photographs, he said, he wishes to “make a monumental mural that will remain in the future as a witness and tribute to this great experience of collective solidarity.”

The final work will be exhibited as part of the next edition of the Cruïlla Festival. The organization has already announced that the festival will hardly be able to take place as we know it this 2020, and in case of postponement, the photomosaic will be shown at Cruïlla Festival 2021. Its director, Jordi Herreruela, recalled that “Omnium and Cruilla have one of their fundamental values in the defense of Catalan identity and culture ”. A fact, he said, that both entities share with a vocation to highlight the great Catalan artists who contribute spread the Catalan culture around the world. In this sense, Herreruela has assured that “Joan Fontcuberta is one of the most important artists in the country and, therefore, with this action, we want to vindicate him and make him known to those who still don’t know him”.